Finding Zen in a Patch of Nature 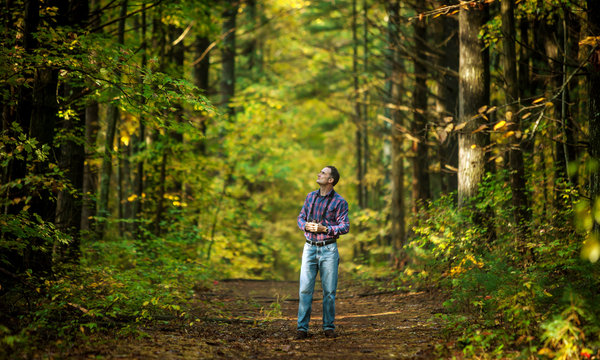 SEWANEE, Tenn. — It is afternoon in a hardwood forest on the edge of the Cumberland Plateau, and the cicadas are singing.

David Haskell, an ecologist and evolutionary biologist at the University of the South, is taking me through part of the 13,000 acres owned by the university, to a small circle of forest floor a bit over a yard in diameter. He visited this randomly chosen forest “mandala,” as he calls it, many times over the course of a year and recorded his observations in “The Forest Unseen: A Year’s Watch in Nature.”

He is pointing out flowers, salamanders, insects, trees, as we follow a well-worn hiking path, and stops for a moment to listen. These are swamp cicadas, he says, not the kind that hatch all at once after years underground and hammer the ear mercilessly.

“Was it last year or the year before we had the 13-year cicadas?” he says. “I took my sound pressure meter down to a place where they were really loud, and it came to over 90 decibels. At 85 OSHA says you need hearing protection in your workplace.

“Everybody else hates them.”

But to him, the noise is biological alchemy, sunlight into sound. “These guys have been feeding on roots for 13 years. And so it’s 13 years of combined Tennessee forest productivity being blasted out.”

It is this kind of perception, halfway between metaphor and field note, that makes his voice a welcome entry in the world of nature writers. He thinks like a biologist, writes like a poet, and gives the natural world the kind of open-minded attention one expects from a Zen monk rather than a hypothesis-driven scientist. He avoids terms like “nature deficit disorder” and refuses to scold the bug-fearing masses. His pitch is more old-fashioned, grounded in aesthetics as much as science.

“You can live a perfectly happy life never having heard of Shakespeare,” he says, “but your life is in some ways a little diminished, because there’s such beauty there.